Keep up with the news by installing RT’s extension for Firefox. Never miss a story with this clean and simple app that delivers the latest headlines to you.

Space-time structure exhibiting closed paths in space (horizontal) and time (vertical). A quantum particle travels through a wormhole back in time and returns to the same location in space and time. (Photo credit: Martin Ringbauer)

Scientists have simulated time travel by using particles of light acting as quantum particles sent away and then brought back to their original space-time location. This is a huge step toward marrying two of the most irreconcilable theories in physics.

Since traveling all the way to a black hole to see if an object you’re holding would bend, break or put itself back together in inexplicable ways is a bit of a trek, scientists have decided to find a point of convergence between general relativity and quantum mechanics in lab conditions, and they achieved success.

Australian researchers from the UQ’s School of Mathematics and Physics wanted to plug the holes in the discrepancies that exist between two of our most commonly accepted physics theories, which is no easy task: on the one hand, you have Einstein’s theory of general relativity, which predicts the behavior of massive objects like planets and galaxies; but on the other, you have something whose laws completely clash with Einstein’s – and that is the theory of quantum mechanics, which describes our world at the molecular level. And this is where things get interesting: we still have no concrete idea of all the principles of movement and interaction that underpin this theory.

Natural laws of space and time simply break down there.

The light particles used in the study are known as photons, and in this University of Queensland study, they stood in for actual quantum particles for the purpose of finding out how they behaved while moving through space and time.

The team simulated the behavior of a single photon that travels back in time through a wormhole and meets its older self – an identical photon. "We used single photons to do this but the time-travel was simulated by using a second photon to play the part of the past incarnation of the time traveling photon,” said UQ Physics Professor Tim Ralph as quoted by The Speaker.

The findings were published in the journal Nature Communications and gained support from the country’s key institutions on quantum physics.

Some of the biggest examples of why the two approaches can’t be reconciled concern the so-called space-time loop. Einstein suggested that you can travel back in time and return to the starting point in space and time. This presented a problem, known commonly as the 'grandparents paradox,' theorized by Kurt Godel in 1949: if you were to travel back in time and prevent your grandparents from meeting, and in so doing prevent your own birth, the classical laws of physics would prevent you from being born.

But Tim Ralph has reminded that in 1991, such situations could be avoided by harnessing quantum mechanics’ flexible laws: “The properties of quantum particles are ‘fuzzy’ or uncertain to start with, so this gives them enough wiggle room to avoid inconsistent time travel situations,” he said.

There are still ways in which science hasn’t tested the meeting points between general relativity and quantum mechanics – such as when relativity is tested under extreme conditions, where its laws visibly seem to bend, just like near the event horizon of a black hole.

But since it’s not really easy to approach one, the UQ scientists were content with testing out these points of convergence on photons.

"Our study provides insights into where and how nature might behave differently from what our theories predict," Professor Ralph said.


no, we manifest nothing. we perceive what is within our range to perceive. there are still governing laws. nothing manifests physically unless you have OBSERVED it (with the tools of perception you have).

The universe exists only as a 'program' in the mind of the Creator. Therefore we 'exist', like the universe, in a virtual reality, and, i might add, subject to be deleted. The universe is a duality: material and etherial. The material consits of matter-enery and space-time. The etherial is a substrate that 'displays' the material, re-energizes it, and organizes it: an interface between the universe and the Creator. Scripture contains a wealth of information about our world.

Does something exist jecause because you think it? Afterall, things do not exist physically unless we manifest them into the physical. But your imagination is unlimited. But we also know something does not equal true just because you thought it.

Where to watch Schedule 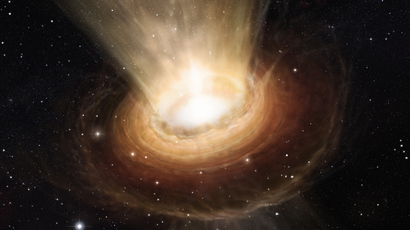 Physics breakthrough: Is the universe a giant hologram? 127