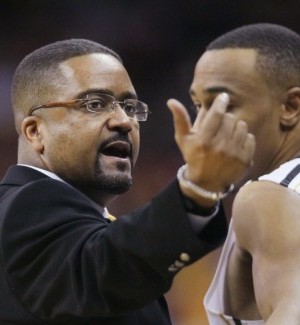 Missouri head coach Frank Haith during a Big 12 tournament game between Missouri and Baylor on March 10, 2012, at the Sprint Center in Kansas City, Mo. Photo by Chris Lee, clee@post-dispatch.com

KANSAS CITY •  He already had fought back his emotions on national television and now Frank Haith was at it again, biting down desperately on his lower lip, trying mightily to hold back on the sort of deep and cleansing sob that was just dying to get out.

There were tears in there that wanted to get out, needed to get out, deserved to be witnessed by all these cheering, giddy and delirious Missouri loyalists who were singing his praises for delivering this Big 12 tournament championship trophy to them.

There he was standing in the midst of this crazy championship commotion — the Sprint Center was throbbing with M-I-Z, Z-O-U! chants, and everyone was reveling in the moment of the improbability and feel-good vindication of winning the tourney as a fine parting gift on the way out the door to the SEC — and Haith was trying his best to hold on to his wits.

But then along came Kim English, draped his long arms over his head coach’s shoulders, leaned down and whispered something that forced Haith to wrestle with his emotions once again.

There was a lot to think about.

A year ago, when Mizzou’s basketball team left the Big 12 tournament, it was a dysfunctional program on the verge of an emotional implosion. Now everything had changed. English’s face was beaming that megawatt smile he always carries around with him as if it’s air and water. But as he gave his coach a hug, you had to understand how meaningful this embrace was for both, who began this journey to the Big 12 tournament title with a not-so-simple phone call last April shortly after Haith had been hired to replace Mike Anderson amid howls from a discontented fan base.

“I remember that phone call like it was yesterday,” English said after Mizzou had beaten Baylor 90-75, locked up an automatic berth into the NCAA Tournament and presented a mighty strong argument that a No.1 seed should be in the mix, too.

The phone call was from a new coach whom no one really wanted to a player who was part of a team full of bruised egos and hurt feelings. The coach was reaching out to the one familiar face in the program (Haith had unsuccessfully recruited English three years earlier to go to Miami), hoping English could convince his teammates to just give Haith a chance to fix all that was ailing their downtrodden team.

“And now here we are,” said English grinning from ear to ear.

Yes, here they are, a program revived. Mizzou is one of the best college basketball teams in the country, and has Frank Haith to thank for it. MU is 30-4, with a Big 12 tournament trophy in hand. The Tigers have built a résumé that is clearly deserving of so much more attention and respect, like being awarded a No.1 seed Sunday .

And again, they have Haith to thank for that, too.

The guy no one wanted. The guy everyone was ripping when he was hired. The guy who absorbed this onslaught of public criticism with class and dignity and even with a touch of humor and a mound of humility.

English paused for just a moment because he wanted to make this point very clear. This conversation and this season was about something so much more revealing than simply showing how well Haith draws up Xs and Os on the sidelines, which he does as well as anyone. It was about what happens when adversity punches you in the gut and demands that you either crumble or counterpunch like a man possessed.

The story of this coach and team is how they came out swinging and played this season with a singular purpose. It wasn’t about proving people wrong. It was about confirming everything they all believed about themselves. That they were better than people thought. A lot better. And tougher, too.

“And that’s why more than a basketball coach, I respect him as a man,” English said. “When people were talking bad about him, our fans were talking bad about a man they never met, and it crushed me. They didn’t know him like I know him. (But) he stayed in the process. He stayed true to his faith in God. He went home late afternoons to spend time with his family, then came to work with us. He did those three things no matter what people said about him, and then he did those same three things when people were calling him the greatest thing since sliced bread. And that’s what makes me respect him even more. (It’s) his ability to stay in the process and take criticism and take the praise and treat them both as the same thing.”

Players always notice that about coaches. Give them a man who is consistent, not some emotional elevator who goes up and down with the successes and failures of the season, and they will follow him to the ends of the earth. Haith was the emotionally steady rock that this emotionally frail team desperately needed. And that goes a long way in explaining how they have been transformed from an emotional wreck into one of the mentally tough teams you’ve ever seen. But here’s the thing you have to appreciate the most about what Haith has done.

He isn’t looking for opportunities to tell you “I told you so,” even though he deserves to do that. You’ll never see him in some tug of war on the podium fighting with his boss or his players trying to gobble up the spotlight.

“Just to show you how he is,” said English, “did you notice what was going on when they were giving us the trophy?”

And the only one who wasn’t on the stage with the trophy at center court was Haith.

“They’re getting ready to present us with the trophy, and I saw him over there with his family,” said English, just shaking his head in equal parts pride and amazement. “I was like, ‘Come on coach. This is yours. You got this. You constructed this. You made us play the way we played.’ He’s so humble. He’s such a humble guy”

Haith finally took the trophy, and more than an hour later he stood in a quiet room smiling at English’s kind words.

“I’m a behind-the-scenes guy,” he said. “I’m not a head coach who needs to be up front. It’s about the players. It’s about those guys and the hard work they put in. We’re just doing what we’re supposed to do, coach these young men on and off the court. That’s our jobs. We are supposed to help them grow as people and players. I just wanted those guys to have that moment for themselves.”

He wouldn’t say an unkind word about any of his critics, though you know he could. Instead, he stood there sipping on a cup of ice water grinning and exhaling and thinking about the next challenge to conquer.

“If you have family and faith in place, you can endure and overcome anything,” he said. “Has it been trying? Absolutely. Has it been motivating? Absolutely. But you don’t get through it unless you stay true to who you are. That’s what makes this year so special, all the things that they’ve had to overcome and accomplished.”

He couldn’t bring himself to say that he had overcome and accomplished a lot, too. But he should have. He deserves to say that, and a whole lot more.

Copyright 2012 STLtoday.com. All rights reserved. This material may not be published, broadcast, rewritten or redistributed.

More from Our Partners

Bryan Burwell covers a wide spectrum of sports as a columnist for the Post-Dispatch.