Take five each week and catch up on the big happenings in the world of movies. You'll find the week's biggest news, the latest trailers, candid photos of the stars, and more.

1. The Top Story - 'New Moon' Tickets Are Selling Out Already 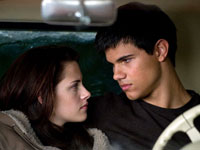 Want to be in the audience of the very first midnight screenings of "The Twilight Saga: New Moon"? You may have already missed your chance.

Advance tickets for the much-anticipated sequel went on sale a week ago, and shows are already selling out. Even the websites where early tickets can be purchased are getting surprised by the rush of sales. Joel Cohen, Executive Vice President of MovieTickets.com said, "We expected 'New Moon' to be hugely popular when tickets went on sale... but seeing sellouts nine weeks prior to its release is unheard of." According to their data, 26% of sales at MovieTickets.com were for "New Moon," with 17 shows already sold out completely. Fandango.com also reported that "New Moon" accounted for a higher percentage of ticket sales than any movie that opened last Friday.

Currently, the first screening available is at 12:01am on Thursday, November 19th, but with demand already so high the studio could potentially add earlier showtimes. While "New Moon" may be the most popular early seller today, tickets are also available for another movie that's even farther away. "Avatar," James Cameron's long-awaited sci-fi epic, is already selling seats for IMAX 3D showings on December 17th, a full twelve weeks from now.

Lots of movies claim to be "star-studded," but few have ever had quite as many famous faces as next year's romantic comedy "Valentine's Day." Check out this line-up: Jessica Alba, Jessica Biel, Bradley Cooper, Patrick Dempsey, Jamie Foxx, Jennifer Garner, Anne Hathaway, Ashton Kutcher, Queen Latifah, and, oh yeah, Julia Roberts. They all appear in this series of interconnected love stories from "Pretty Woman" director Garry Marshall, coming next February.

Nicolas Cage was set to play the villian in the upcoming Michel Gondry version of "The Green Hornet," but he announced at last week's Toronto International Film Festival that he has dropped out of the project. The movie, which also stars Seth Rogen and Cameron Diaz, is already filming.

According to The Canadian Press, Cage was reportedly unhappy with how his character -- the nemesis to Rogen's masked hero, the Green Hornet -- was written, stating that he "wasn't interested in just being just a straight-up bad guy who was killing people willy-nilly." He wanted his character to "have some humanity."

While the character of the Green Hornet has been crusading against crime on the radio, TV, and in comic books since the 1930s, he never had a signature enemy (like the Joker is for Batman). Rogen, who also co-wrote the script, told MTV, "There was no classic villain, so we had to create a villain." He added that while there is comedy in the movie, it doesn't come from this newly-created bad guy, saying, "We wanted him to be very scary."

Taking Cage's place as the villain will be Christoph Waltz, the German actor who wowed audiences this summer with his turn as the wicked Col. Hans Landa in "Inglourious Basterds." "The Green Hornet" flies into movie theaters on December 17, 2010.

4. The Star to Watch - Joel McHale

For fans of the television show "The Soup," Joel McHale is no stranger. His snarky comments about the absurdities of daytime TV and popular culture might very well be the best thing on the E! Network. But McHale is now getting a much wider audience: not only is he starring opposite Chevy Chase in the new NBC comedy "Community," but he appears opposite Matt Damon in the new film "The Informant!"

McHale was born in Rome, Italy, but he grew up near Seattle. He attended the University of Washington on a rowing scholarship, but after getting into a scuffle with his teammates, he quit and went out for football instead. He spent two years on the team at tight end, but he said his favorite moment was getting big laughs from the other players by imitating the team doctor.

His first job in comedy was on a local Seattle sketch show called "Almost Live!" that also started the TV career of "Bill Nye the Science Guy." After landing some bit parts on TV and in "Spider-Man 2," McHale began hosting "The Soup." It was a big step; the first host of the show -- then called "Talk Soup" -- was Greg Kinnear, who went on headline movies and nab an Oscar nomination.

McHale plans to continue hosting "The Soup" while also playing the lead as an unscrupulous lawyer going back to school on "Community." Plus, he can be seen in his biggest film role to date as an FBI agent in "The Informant!" To give this true story of corporate intrigue an undercurrent of humor, director Steven Soderbergh cast many comedians in supporting roles, including Patton Oswalt, Andrew Daly, and Paul F. Tompkins (host of another weekly snark-fest, VH1's "Best Week Ever").

Watch clips from 'The Informant!' >>

Yahoo! Movies is now on

NOTICE: We collect personal information on this site. To learn more about how we use your information, see our Privacy Policy

Tell us what you think about Yahoo! Movies - Send us your feedback