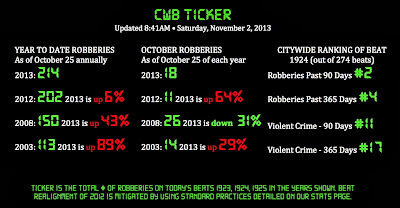 The city has released the following neighborhood robbery information since our last Ticker update. CWB's original stories are linked via the Case Numbers, when available.

Also
CWB audited our robbery database for this update.

In the audit, we found one robbery from June that the city has classified as an aggravated battery online. We have added that incident to the robbery count.

On the morning of June 23, 2013, two young men were stabbed with glass bottles near the Belmont Red Line station as they waited for police to assist with two phone thieves that they were detaining. The district was in Radio Assignment Pending status at the time and no officers were ever in route to assist. During the wait, a crowd gathered and attacked the men.

Two individuals have been charged with robbery, aggravated battery, and mob action in the case.

Email ThisBlogThis!Share to TwitterShare to Facebook
Posted by Crime In Boystown at 11/02/2013 08:57:00 AM
Labels: Ticker

Some people just don't get it.

For the second time this week, Chicago police have made an arrest after someone busted a window on Halsted Street. 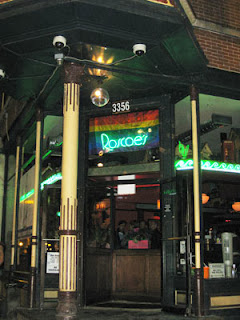 Police were called to Roscoe's Tavern, 3356 N. Halsted, after a grown man kicked and shattered their front door in anger after closing time. The idiot, described as male, white, bald, and wearing a pink shirt, was taken into custody.

Moments after the man was driven away, his friends began pounding violently on Roscoe's windows and police were called again. The friends were a little bit smarter than their cohort. They decided to leave before police arrived.

In an unrelated incident on Wednesday night, a man walked up to Spin nightclub, 3206 N. Halsted, broke a window, and then sauntered into another nearby bar. He, too, was arrested.

Beer-Battered
There are no robberies to report from overnight. Other occurrences on the streets:

12:14AM: A group of men are heard fighting in the alley behind the 900 block of Waveland. They are gone when police arrive.

1:23AM: An off-duty police officer is struggling with a female at Halsted and Roscoe. No arrest is made.

3:49AM: An officer asks for help with a "big crowd" that has gathered across from Circuit Nightclub on Halsted Street. An ambulance is then summoned for a woman who's been struck with broken glass.

4:04AM: A man is reportedly beaten by two offenders near Broadway and Waveland. The assailants, described as male, black, and one having dreadlocks, are last seen running eastbound on Waveland. No report filed.

"99% chance if you have had your bike stolen in Boystown, it was this guy."
- A CWB reader who wears a blue shirt at work.

It's been quite a performance for a 26-year-old punk whose address of record is the Broadway Youth Center's former location at Broadway and Belmont.

Around 10:30 on Halloween night, a resident of the courtyard building at 815 W. Cornelia saw an offender, described as a white male wearing gray sweat pants, bust into the complex's laundry machines to steal change. The thief then fled on a bicycle that the resident believes was also stolen from the building.

The witness flagged down a passing officer who broadcast the suspect's description. Another unit at Halsted and Belmont immediately spotted the offender and had him transported back to the apartment building where he was positively identified.

This incident is recorded as a burglary-unlawful entry in CPD case #HW515638.

The slug has also logged these recent arrests in Chicago:


The lack of activity between March and August of this year can be attributed to the fact that he was in jail on a warrant during that time.

HALLOW-MEAN: Beaten By Man In Penguin Costume & Other Frightful Calls

11:20PM Thursday: A CTA bus driver is punched in the face by a passenger at Belmont and Broadway. Witnesses say the offender, described as male, white, with short black hair, escaped in a passing taxi cab. Recorded as a battery to a protected employee in CPD case HW515648.

12:06AM Friday: Battery at Merkle's Bar & Grill, 3516 N. Clark, in Wrigleyville. An officer calls for an ambulance to treat a victim who's been "beat up pretty bad." One arrest for battery

12:44AM Friday: Circuit nightclub, 3641 N. Halsted, calls for police and an ambulance after a man is beaten up inside the bar. The victim is transported to Illinois Masonic. Police record the incident as simple battery in case #HW515761.

1:28AM Friday: Someone stole a bible from behind the bar at John Barleycorn, 3524 N. Clark. The offender, described as male, white, and 5'8" tall, slips away. 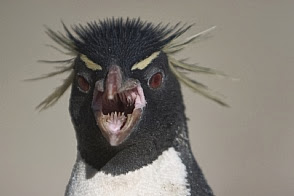 1:43AM Friday: A 911 caller at Belmont and Sheffield says he's been beaten up by a guy wearing a penguin suit.

2:25AM Friday: Multiple calls of four people fighting in the street and, later, in the Dunkin' Donuts parking lot at Clark and Belmont.

3:49AM Friday: Several people are shoplifting from the 7-Eleven store at Sheffield and Addison.

4:33AM Friday: A Boystown resident and his friends report being battered by three black "women," one of whom is bald, at Halsted and Belmont. Officers cannot find the alleged offenders during a search of the area. They give the victims a ride home.

5:06AM Friday: A man reportedly enters the Subway restaurant, 901 W. Belmont, and strikes an employee.
3 comments: 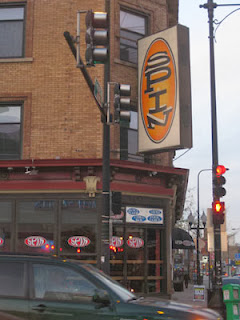 Doormen at Spin nightclub at Halsted and Belmont probably couldn't believe their eyes around 11PM Wednesday night, after a man walked up, busted out one of their windows, and then strolled across the street to the Lucky Horseshoe Lounge.

An officer on patrol was flagged down by a Spin employee. He and another unit went into the Horseshoe and took the alleged offender into custody.

The incident is recorded as a criminal damage to property in CPD case #HW514100. 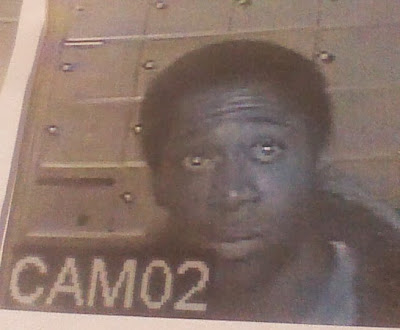 An area resident has posted surveillance photos on Reddit that he says show a package thief striking his building on Tuesday afternoon.

The Reddit poster has not been more specific about where his building is located, other than to say "definitely East Lakeview."

He describes the alleged thief as being male, black, "young," between 5'10" and 6'2" tall, with short hair. The poster says that man is wearing a brown 3/4-length jacket that appears blue in the photo due to discoloration in the surveillance system. 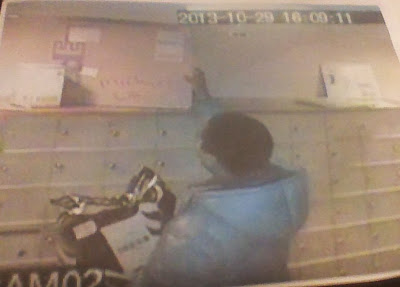 As CWB has reported on Sunday, there has been a noticeable spike in package thefts recently, with the area around Pine Grove and Grace being particularly "hot."

CWB reported on another package thief, described as a Hispanic man with a clear backpack who struck in the 3500 block of Pine Grove on Monday, October 21.

It is important to keep in mind that package thieves will be on the prowl with increasing frequency as the holiday shipping season arrives.
3 comments:

Officers have located a car that was stolen from the 700 block of Barry on Sunday morning.

A suburban woman had left her vehicle's keys in the car, which was quickly swiped by a member of the Lake View "welcoming committee."

The 2008 Honda CRV with a University of Iowa license plate frame was found under the L tracks in the 4000 block of North Kenmore around 6:10 this evening.

Police have not had nearly as much luck in catching up with a woman wanted for her alleged involvement in a recent battery at the Center on Halsted.

A 911 caller reported that the heavy-set white female suspect returned to the Center on Halsted around 3 o'clock this afternoon. She was not on-scene when officers arrived.

This is at least the the second time that witnesses at the Center have reported the woman's return to police. She also managed to leave before police arrived on Sunday evening.

Three men who are accused of participating in the battery were arrested when they returned to the Center on Halsted on the morning after the incident.
5 comments:

Hey! What's that guy doing in my car at 5:30 on a Wednesday morning?

This morning, the answer to that question for a resident who lives at Belmont and Sheffield was "stealing your money and iPad."

Police were at the victim's address within 20 seconds of his call, but they could find no trace of the offender, who is described as male, black, wearing a blue hat and black clothing.

He was last seen in the victim's car, which was parked the west alley of Sheffield north of Belmont.

Email ThisBlogThis!Share to TwitterShare to Facebook
Posted by Crime In Boystown at 10/30/2013 08:34:00 AM
Labels: Belmont and Sheffield, escaped, theft

Police were called to the Jewel-Osco on Broadway near Addison at 8:30 Tuesday night after witnesses reported that "a bunch of gangbangers" battered a man and chased him into the store. The "gangbangers" were said to be waiting outside for their victim to come back out. 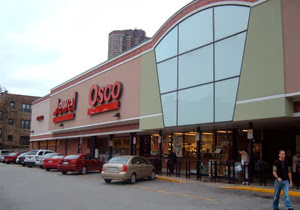 When police arrived, the offenders were gone, but the victim was still on-hand. He toured the area with an officer, concentrating on the area near the Night Ministry's outreach service site at Belmont and Halsted.

The offenders were described as:

One offender was located and positively identified outside of the condominium complex at 3232 N. Halsted around 9pm.

He has been taken into custody for battery as recorded in CPD case #HW512499.

Regular CWB readers know that the 19th district is dangerously understaffed. The district police commander has said that the district has lost 15% of its manpower since March 2012. We believe the actual number of officers lost is significantly greater than that.

Running low or completely out of police officers is not only bad for citizens who need help. It's dangerous for the cops. The following transpired over the course of four minutes, beginning at 11:54 this morning:

DISPATCHER: Anyone near? Let me know.

UNKNOWN SUPERVISOR: Is every car on assignment or something? What's going on?

DISPATCHER: Traffic stop, sir. Traffic stop. He has him in custody now. He asked for a back up.

UNKNOWN SUPERVISOR: No cars available to back him up? I'm just curious.