By Justin Hyde | Motoramic – 3 hours ago 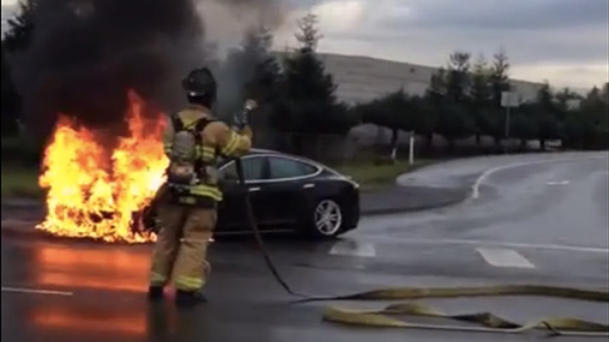 Every year, about 180,000 vehicles catch fire across the United States, so a single car fire outside of Seattle on Tuesday that injured no one wouldn't usually catch much notice. Except that the blaze shown above was the first reported fire of a Tesla Model S — and for a company built around making electric vehicle tech mainstream, the fire sparked the old question about whether its batteries were to blame.

At the moment, it's not clear what started the fire, but it wasn't a spontaneous event. The driver of the Model S in Kent, Wash., reported running over a metal object; soon after, the Model S computer system warned of something wrong with the car. As the video below shows (warning: contains explicit language), the fire was contained to the front of the Model S, and according to Tesla, no one was injured.

It's the kind of story Tesla has been anticipating for years. Much of Tesla's run from a start-up to a major automaker has been driven by the idea of getting buyers comfortable with putting electric vehicles in their homes. It's why the Model S was designed to look like a typical sedan rather than an electric-powered spaceship, and why many of Tesla's patents involve ways to fireproof its lithium-ion batteries. Just last month, co-founder Elon Musk told Yahoo Autos there had not been a single reported fire in a Model S, and when Boeing needed help redesigning lithium-ion batteries in its Dreamliner passenger jet after a few reported fires, it turned to Tesla.

There's no sign in the video of a widespread battery fire; the battery pack in the Model S runs from roughly the front to rear axle on the bottom of the car; the fire in the video above never breeches the passenger compartment. The front of the Model S is mostly empty space; its electric motors are in the rear, and the flames appear strongest around the carpeted front trunk compartment.

The word of the video, coupled with a stock downgrade from one Wall Street analyst sent Tesla's shares plunging, but investors had clawed back some of those losses by the time the New York Stock Exchange closed Wednesday, with shares rallying to $180.95. That was still enough to lower Tesla's market value by $600 million to just under $22 billion, making it one of the costliest car fires ever — although Tesla shares are still up 400 percent this year. Lithium-ion batteries can pose a new kind of risk, but for now there's nothing in this case to suggest there anywhere near as flammable as the gallons of gasoline millions of drivers rely on daily.