The race is on for a better mammogram

Nuclear physicist Edward Flynn was moved by his wife's cancer to find a better procedure. He's not the only one angling for a piece of a growing $6 billion market.

FORTUNE -- When his first wife went into a coma following cardiac arrest in 1978, nuclear physicist Dr. Edward Flynn vowed to build a machine that could save lives. Flynn's wife died 18 months later, but the experience moved Flynn to create a technology that could map brain activity using magnetic fields.

When Flynn's second wife was diagnosed with early stage breast cancer at 53 years old, he was ready for round two. The technology that he'd developed before would prove useful once again. While a mammogram had successfully detected abnormal cells, Flynn says that the procedures to detect and treat his wife's cancer seemed inadequate. "Radiation just didn't seem necessary. It would have caused a lot of scarring on the breast tissue and she would never be able to have another mammogram that worked," he says.

So Flynn retreated to his garage at his home in Albuquerque, New Mexico, where he spent the next six months building something better. Flynn's aim was to use magnetic nano-particles to develop a less invasive method to detect breast cancer than a typical mammogram. "Unfortunately, I couldn't get liquid helium delivered to my garage to finish the device," Flynn says jokingly. And so he moved his operation to a facility at the University of New Mexico Health Sciences Center, where the device now known as SQUID (superconducting quantum interference device) was finished in partnership with his new business venture Senior Scientifics.

Flynn is not the first to realize the flaws of digital mammography. Women around the country often find it an uncomfortable and anxiety inducing process. In order to get a clear image, a typical digital mammography machine squeezes the breast between two plates so that all of the breast tissue is of equal width. For women with more or denser breast tissue, even the act of squeezing the breast is sometimes not enough to get an accurate reading, and requires a follow up MRI or ultrasound.

Major industry is trying to find a better way. General Electric (GE), Philips and Hologic (HOLX) are all striving for bigger pieces of the nearly $6 billion medical imaging industry, much of which is focused on breast screening devices according to industry analyst firm Frost & Sullivan. In 2011, roughly 40 million mammograms were performed in the U.S., making it a prime market for better medical technologies. Sales of film and digital mammography machines in the U.S. totaled $425 million this year and are expected to see a slow but steady overall growth of 4% by 2015

Demand is being stoked by unmet needs, according to David Danielson, a spokesperson for Hologic. In February, the company received FDA approval for its digital tomosynthesis system. The machine looks and works similarly to a typical mammography system, but includes an overhead sensor, which takes a 3D image of the breast by scanning 1-millimeter layers of breast tissue. While GE pioneered the mammography industry in 2000 when it developed the digital mammogram, Hologic is now the industry leader, selling about 65% of mammography systems in the U.S. each month.

In October, GE received FDA approval for its so-called SenoBright. That system uses contrast to produce an enhanced secondary image in addition to a traditional mammography scan. The contrast allows for a clearer reading of the image, much like you would get in a follow up MRI scan. While the company says it expects the new technology to have a "significantly" lower false positive rate than current mammography systems, it still can't detect whether a mass is cancerous -- a factor some physicians feel is key to new technologies.

Nearly 300,000 women in the U.S. were diagnosed with breast cancer this year, according to the American Cancer Society. While frequent screening and early detection can lower the mortality rate by up to 30%, the mammography "gold standard" is far from perfect, says Elizabeth Morris, chief of breast imaging at Memorial Sloan-Kettering Cancer Center. Mammograms miss about 20% of cancers in normal breast tissue, and up to 50% in denser breast tissues, she says. And even if the x-ray does manage to pick up an abnormality, roughly 70% of those patients called back will be a false positive, meaning they don't have cancer. "I'm just not sure 3D imaging is going to be a huge game changer," Morris says. "The holy grail is when we're able to inject something that allows us to see where the cancer is and does targeted therapy at the same time."

John Hazle of MD Anderson Cancer Center agrees. In fact, that's the reason, he says, MD Anderson signed on for a pre-clinical evaluation of Edward Flynn's magnetic nano-particle technology in August this year. Unlike a mammogram, which can only detect a mass of at least 100 million cancer cells, Flynn's nano-particle technology can detect cancer at a mass of 100,000 cells, and is currently being programmed to detect down to 12,000 cells. By the time it's ready for commercial use, it could detect cancer before stage one -- down to "a few thousand cells" says Gerald Grafe, president of Senior Scientifics, now a division of Manhattan Scientifics (MHTX). "Imaging is fundamentally the wrong approach. In cancer, you're not after the shape, you're looking for a kind of cell," Grafe argues.

Instead of producing an image of a large mass of cancer cells, Flynn's technology produces a magnetic signal when the nano-particles attach to cancer cells. This allows physicians to see not only where the cancer is, but also how many cells there are. While the technology is nowhere near FDA approval, and it'll likely be several years before Flynn's dreams come to fruition, Flynn claims his work is just one more step toward the right approach.

Every morning, discover the companies, deals and trends in tech that are moving markets and making headlines. SUBSCRIBE

Receive Fortune's newsletter on all the deals that matter, from Wall Street to Sand Hill Road. SUBSCRIBE

Covering the digital giants of Silicon Valley and beyond, an in-depth look at enterprise companies, and the startups disrupting them. Written by Michal Lev-Ram and emailed twice weekly. SUBSCRIBE 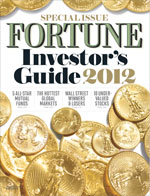 Market indexes are shown in real time, except for the DJIA, which is delayed by two minutes. All times are ET. Disclaimer LIBOR Warning: Neither BBA Enterprises Limited, nor the BBA LIBOR Contributor Banks, nor Reuters, can be held liable for any irregularity or inaccuracy of BBA LIBOR. Disclaimer. Morningstar: © 2011 Morningstar, Inc. All Rights Reserved. Disclaimer The Dow Jones IndexesSM are proprietary to and distributed by Dow Jones & Company, Inc. and have been licensed for use. All content of the Dow Jones IndexesSM © 2011 is proprietary to Dow Jones & Company, Inc. Chicago Mercantile Association. The market data is the property of Chicago Mercantile Exchange Inc. and its licensors. All rights reserved. FactSet Research Systems Inc. 2011. All rights reserved. Most stock quote data provided by BATS.
© 2011 Cable News Network. A Time Warner Company. All Rights Reserved. Terms under which this service is provided to you. Privacy Policy. Ad choices