Is the Computer Mouse Extinct?
(Tech Page One)

Is the Computer Mouse Extinct?
(Tech Page One) 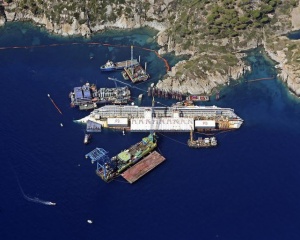 Next year, a referendum will take place on Scottish independence. A look at life and landscapes around the English-Scottish border.  Slideshow

BERLIN (Reuters) - A satirical party has spiced up a dull German election campaign with a television advert depicting a 90-second sex scene, blurred but leaving little to the imagination.

Die Partei (The Party), whose policies include building a wall around Germany and putting Chancellor Angela Merkel on trial in a cage, said the ad was designed to represent its family policy.

Election rules require broadcasters to give parties advertising time to use as the parties see fit.

Merkel, with a comfortable lead in the polls over a so-far relatively toothless opposition, has opted for a bland campaign, short on specifics, that emphasizes business-as-usual.

Germany's top selling newspaper Bild called the advert, which aired at 10:30 p.m. after the main news, complete with steamy sound track of sighs and groans, a "climax" of the campaign. It said only three viewers had called national broadcaster ZDF to complain.

Die Partei failed to meet the legal requirements to stand in the last federal election, but this time is fielding dozens of candidates - with next to no hope of getting any into parliament on September 22.

It described its advert, which ends with the slogan "Vote for The Party and you'll feel good", as having confused "dozens of pensioners".

Among its other policies is a plan to frack Environment Minister Peter Altmaier to release his "enormous energy resources".

Explosions seen at tunnels area between Gaza and…
(Reuters Video)

5 Dumb Mistakes That Will Destroy Your Retirement

How to Get Macbooks for Under $100

How to Exercise Your Brain to Make It Strong

To learn how you can use Content.ad to drive visitors to your content or add this service to your site, please contact us at info@content.ad.
We welcome comments that advance the story through relevant opinion, anecdotes, links and data. If you see a comment that you believe is irrelevant or inappropriate, you can flag it to our editors by using the report abuse links. Views expressed in the comments do not represent those of Reuters. For more information on our comment policy, see http://blogs.reuters.com/fulldisclosure/2010/09/27/toward-a-more-thoughtful-conversation-on-stories/
Comments (0)
Be the first to comment on reuters.com.
Add yours using the box above.

WASHINGTON - The number of Americans filing new claims for jobless benefits appeared to drop to a near 7-1/2-year low last week but the decline was driven by two states that had trouble processing filings, making it difficult to get a clear read on the health of the labor market.

WASHINGTON - When the U.S. government reports on economic growth for the third quarter next month, the result may very well disappoint.

Lifting the veil on McKinsey

The White House's new round of Israeli-Palestinian negotiations is unlikely to succeed, and, even if it did, it would have little impact on other more immediately pressing Middle East conflicts.  Commentary

Our best pictures from the last 24 hours.