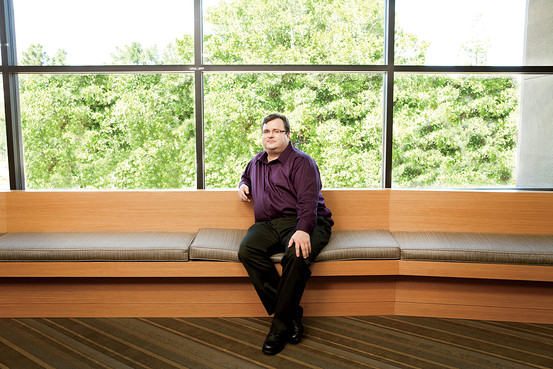 THE CONNECTOR | Hoffman (pictured in his Silicon Valley office) is a newly minted billionaire, courtesy of his LinkedIn IPO.

Reid Hoffman founded his first social site, called SocialNet, before Mark Zuckerberg had even started high school and has been in the vanguard of the social-media movement ever since. The 44-year-old venture capitalist, known as "the most connected person in Silicon Valley," has invested in some 114 tech startups since 1995, including juggernauts like Facebook, Flickr, Groupon and Zynga, both on his own and as a partner in the venture firm Greylock Partners. One of his earliest strikes was PayPal, where he served on the executive team and cashed out millions when it was bought by eBay in 2002. He also co-founded the professional networking site LinkedIn, which has over 100 million users and a market cap of $8 billion thanks to its recent red-hot IPO.

Hoffman is a self-diagnosed "CrackBerry" addict (five smartphones, two Macs, a PC, an iPad and an Android Tablet) who rarely vacations, spending most weekends fielding ideas from young entrepreneurs. He believes social networking will remain the dominant platform on which to build new apps and services and looking ahead (yes, Web 3.0 is already being discussed) sees data—especially personal data derived from people's activities online—as fueling the next boom. Privacy, he claims, is primarily an issue with old people.

“Social networks do best when they tap into one of the seven deadly sins. Facebook is ego. Zynga is sloth. LinkedIn is greed.”

Silicon Valley has two speeds: full speed ahead and not going anywhere. Now we're in full-forward motion. There is a lot of interest and a lot of capital out here. And there are a lot of companies being created. When you have a thousand companies getting started, many of them hope to become billion-dollar companies, but a number of them won't play out in that direction. So in that respect, sure, there is some frothiness. On the other hand, many of them have solid fundamentals. Maybe it won't be a billion-dollar company, but it will be an ongoing value proposition where the business model works, consumers use it, and it fits in with other services and websites.

What's happening today with the whole Web 2.0 movement is that everyone is familiar with the Internet and how it works. Back in 1999 and 2000 it was this weird thing called "cyberspace." It was kind of an adventure as opposed to being part of your everyday life. The Internet has become a medium in which we are all participants. And then our mobile devices enable all kinds of abilities to communicate, search, collaborate and socialize our experience in the electronic medium. That's a lot of the basis for the current boom. We also have a deeper stack of expertise as to what works and what doesn't. The playbooks are better. There are clearly more substantive ideas. That's not to say there won't be errors. There will always be errors.

In the first bubble everyone was saying, "Oh my God, the Web is going to be everything! This is a complete transformation. Online grocery stores and pet stores will be billion-dollar companies!" And when you're moving ahead as fast as you can, you have no basis for evaluating what will or won't work. You end up kind of blitzkrieging in all directions. Part of the reason why you had a particularly painful bust was that a lot of the businesses had been financed without any real fundamentals behind them. On top of this, you had people in business school who were saying, "Instead of going to McKinsey or Goldman, I am going to go work at a startup, because business school has prepared me to be an entrepreneur of these early-stage companies." Of course, that's rarely the case. 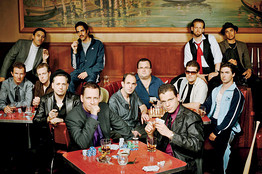 MEET THE FAMILY | Hoffman and his PayPal mafia counterparts made millions selling to eBay in 2002. 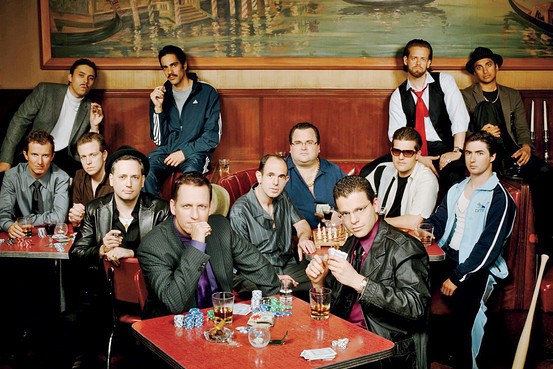 The current cast of entrepreneurs is from two segments: young folks who grew up with the Internet and mobile devices. They are actually building products they think they need and that the people around them need. And because of the familiarity of swimming in these waters, they are discovering things that should be part of the ecosystem. The other segment is made up of Web 1.0 entrepreneurs who learned from that vector and are playing again. If you look at the current Internet sites, Mark Zuckerberg is part of the first crew. But in the second crew you have Mark Pincus at Zynga, Ev Williams at Twitter and Pandora's Tim Westergren. Pandora, by the way, is one of the few companies that survived the first boom and then took off in the second.

When we are evaluating new business pitches at Greylock, we look for product people and deeply passionate people. To make a great product, you have to be passionate about it in order for it to become something that will improve the lives of hundreds of millions of people. This is part of why Apple has had such a comeback in the Microsoft-versus-Apple battle. Steve Jobs is a really great product guy.

When the idea is on the back of a napkin, the only difference between a madman and a visionary is that the visionary's idea works. So when you are investing at very early stages, you're picking the one you think is the visionary. For example, I don't know if it would have been possible to predict Twitter's growth. "Oh look, everyone is going to share 140-character messages." Really? But because it evolved and got all of this initial celebrity following, it took off. And now that you see it, you say, "Yeah, actually it's really interesting."

I am motivated by how you handle massive improvement in large human ecosystems. Most often I am only interested in an idea if it's going to get hundreds of millions of users. That's the scale that I am always trying to play to. There are some unique circumstances where it's valuable even if it's only tens of millions, but, generally speaking, I'm looking to hit hundreds of millions. Sometimes a person comes to you and says, "I have an idea," like Mark Pincus coming to me about online gaming. And sometimes it's something like Groupon, which is a kind of functioning marketplace for local goods and services that works on discounts and a daily-deal kind of basis. For both, the numbers are off the charts. So it's always about scale.

The reason the social-networking phenomenon is something that I invested in early and massively—I led the Series A financing for Friendster; I founded a company called Socialnet in 1997; I founded LinkedIn; and I was part of the first round of financing in Facebook—it sounds trivial, but people matter. The deeper thing is, it's massively valuable if you can integrate and coordinate with other people in order to enhance their lives. It's valuable in all contexts. Now that the Web is something we're all using, it becomes a platform for all kinds of life enhancement. I think there will be another whole explosion of important things around that. 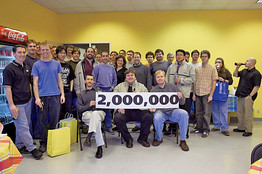 LinkedIn has grown from 2 million members in 2005 to over 100 million today. 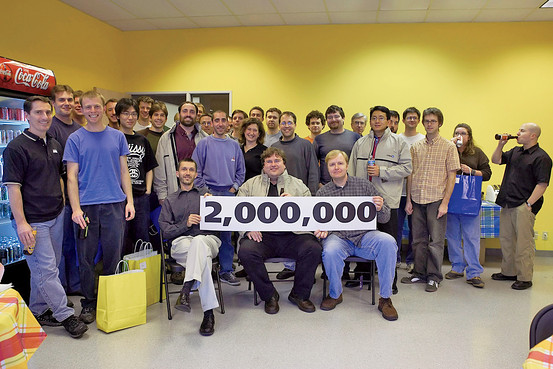 Social networks do best when they tap into one of the seven deadly sins. Facebook is ego. Zynga is sloth [laughter]. LinkedIn is greed. With Facebook, it's vanity, and how people choose to present themselves to their friends. It's the feeling of being connected. I like to emphasize the importance of the deep universal, psychological structure in people's minds. Zynga is about fun. Fun is important. Fun is good. And to have the ability to do something fun for 10 or 15 minutes that's right at your fingertips and involves your friends, well, that's better than television in terms of social connectivity. With LinkedIn it's taking control of your economic destiny and improving how you operate as a professional and how you can develop a competitive advantage. These are fundamentals for having a fulfilling quality of life.

I think data will be the driving force in Web 3.0. A whole host of companies will use data to build new businesses on. There are three kinds: explicit data, where you contribute your profile; implicit data, which is created by how you act online. And then there's analytic data, which is information companies generate through an analysis of explicit and implicit data. At LinkedIn, we might create a picture that shows what your skills are and which skills most apply to you. It was compiled from explicit data you entered into the site about yourself and the people you are connected to, but it isn't actually a function of your activities, like answering questions on LinkedIn. We gathered it through analytics.

Some data matter and some don't. People think, "Oh no! This company has data about me!" To that I say: OK, so a website or mobile application knows that you're a man or a woman, and it's giving you ads based on that. That's a benefit, not a bug. But you should also try to provide a direct benefit for every piece of data you collect from the users. Everything you gather, the user knows it's there because they are participating. They are buying into the benefit of it, and you are getting the benefit too. Data will be foundational in the next wave of mass applications that go to hundreds of millions of people.

--Edited from Newcomb's interview with Hoffman

This copy is for your personal, non-commercial use only. Distribution and use of this material are governed by our Subscriber Agreement and by copyright law. For non-personal use or to order multiple copies, please contact Dow Jones Reprints at 1-800-843-0008 or visit

The latest news and analysis delivered to your in-box. Check the boxes below to sign up.

Thank you !
You will receive in your inbox.

The latest news and analysis delivered to your in-box. Check the boxes below to sign up.

Thank you !
You will receive in your inbox.

Your question to the Journal Community Your comments on articles will show your real name and not a username.Why?

Why use your real name? The Journal Community encourages thoughtful dialogue and meaningful connections between real people. We require the use of your full name to authenticate your identity. The quality of conversations can deteriorate when real identities are not provided.

If you feel you have reached this status change in error, please contact TBD@wsj.com

Please log in or register for free to use Save This.