This copy is for your personal, non-commercial use only. To order presentation-ready copies for distribution to your colleagues, clients or customers visit http://www.djreprints.com.

Uber has raised a new round of funding that values the ride-sharing service at more than $41 billion, putting its market cap on par with that of Time Warner Cable. WSJ's Douglas MacMillan reports. Photo: Getty.
By
Douglas MacMillan,

Ride-sharing service Uber Technologies Inc. said Thursday a new round of funding valued it at $41 billion, a bet by some of the world’s top investors the firm can sustain a breakneck global expansion pace despite fierce challenges from regulators and taxi companies.

The San Francisco-based company collected $1.2 billion that enables it to expand its workforce, lure new drivers, test a delivery service and subsidize prices in some of the 250 cities around the world where it operates. The closely held company has raised eight times as much as its closest ride-sharing rival, Lyft Inc.

The funding is a vote of confidence in Travis Kalanick, Uber’s co-founder and chief executive whose brash personality has courted controversy. A recent privacy scandal stirred by one of Mr. Kalanick’s deputies appeared not to faze investors focused on Uber’s business prospects.

Uber is now valued at $41.2 billion, easily the highest for any private startup now backed by venture capitalists, and above the market capitalizations of publicly traded companies including Delta Air Lines Inc., Charles Schwab Corp. , Salesforce.com Inc. and Kraft Foods Group Inc. (But not all tech startups are soaring.)

Now, the five-year-old company must prove it can turn a mobile app for hailing a ride into a significant and profitable global business. Its app, which lets people hail a car from professional or nonprofessional drivers with a few clicks and a credit card, has become a part of daily life in cities from Anchorage to Shenzhen, China.

Some of that cash will go into defending its services. Uber is in fierce fights with local regulators in many places where it operates. It has faced protests by taxi drivers, shutdowns and laws aimed at forcing ride-sharing services into compliance with safety measures and work rules governing taxi operators. 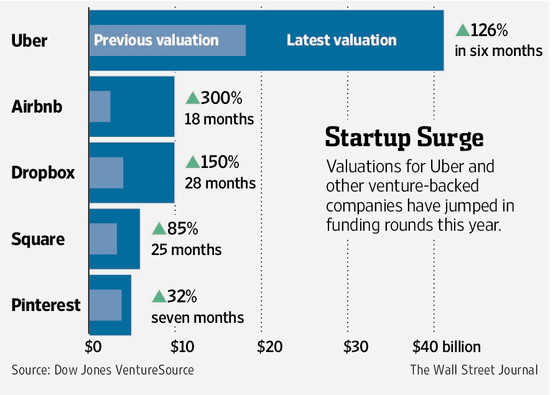 Uber also is exploring using its fleet of drivers to transport goods and services in addition to people. The company has tested deliveries of items including ice cream, flu shots and fresh meals and recently poached the head of Google ’s same-day delivery business.

The latest financing assumes that Uber’s rapid expansion overseas will overcome these hurdles and continue apace, said Bill Gurley, a partner at Uber venture investor Benchmark and a member of the board at the ride-sharing company.

“International expansion probably is the key theme of the fundraising,” said Mr. Gurley. “We feel remarkably good about where we stand in the domestic market and our real growth initiatives are focused internationally.”

The funding round includes several new investors, including Middle East sovereign wealth fund Qatar Investment Authority and at least two hedge funds, Valiant Capital Partners and Lone Pine Capital, said a person who was briefed on the matter. One of the world’s largest venture capital firms, New Enterprise Associates, also made its first investment in Uber, said another person familiar with the matter.

Uber profits by keeping 20% of the fare paid on most rides on its service and gives the rest to its drivers, who work as independent contractors.

It made hundreds of millions of dollars in revenue last year and is growing sales at a clip of more than 40% a quarter, said a person familiar with the company’s operations. That is an increase from earlier this year, when Mr. Kalanick said revenue was doubling every six months.

By the end of next year, Uber expects to be operating at an about $2 billion net annual revenue rate, which excludes driver pay, according to the person familiar with the company’s financials. Such growth is coming from a cookie-cutter global expansion, where the company moves quickly to open up shop, splashes out incentives to sign up drivers and then hires lobbyists and lawyers to gird for legal challenges from taxi companies and regulators.

“They are doing exactly what they need to do to change the market,” said Dave Ashton, co-founder of SnapCar, another app-based car service in France that competes with Uber. “They don’t even make any effort to comply with what they think are bad laws.”

That plan doesn’t always work. Uber last week suspended operations in Nevada after a judge issued an injunction against the startup amid accusations that it competes unfairly with taxis because it doesn’t follow the same rules regarding drivers, insurance and more. Elsewhere, regulators in Brussels are readying new laws that would allow Uber and taxis to coexist, while a decision from a French court over the possible banning of Uber is due Dec. 12.

In Europe, Uber has been the focus of violent protests by taxi drivers and regulatory bans on a carpooling service it calls UberPop that was unveiled this year. UberPop, which uses drivers without professional taxi or chauffeur licenses, is banned in Brussels and facing court challenges in Berlin. In France, the national consumer-protection agency and the Paris prosecutor say the new service is illegal and are backing a suit against Uber in commercial court.

Uber’s response last month was to hold a news conference at its Paris office to declare that the firm would expand UberPop in Paris. In a presentation before giving televised interviews, executives said their goal is to have 70,000 drivers without professional licenses picking up fares across Paris in two years.

Uber executives say they are operating under outdated laws that they fully expect to change once lawmakers see the service’s popularity with constituents. 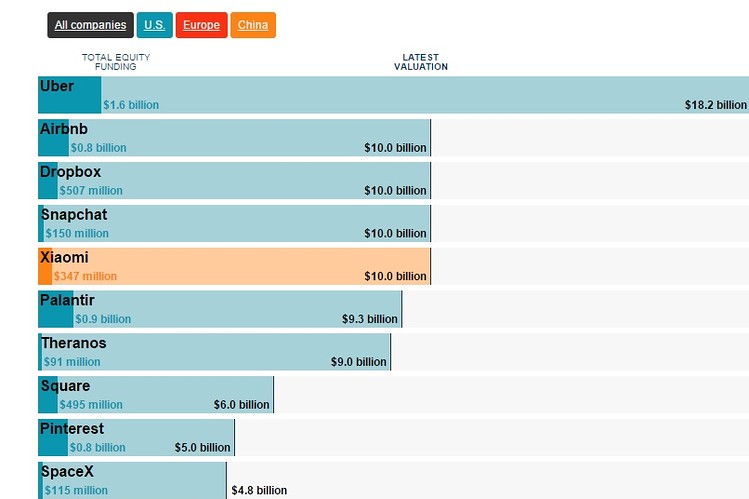 “If every time somebody wants to ban us, we just go along with that, we wouldn’t be in business,” said Mark MacGann, Uber’s main lobbyist in Europe and the former head of government affairs at NYSE Euronext in Brussels.

Uber’s strategy has been to get a foothold in a market in any way possible, whether it offers a way to hail traditional metered taxis, livery cabs or drivers without professional licenses through its ride-sharing services. The key is to get potential customers to download the app and then expand the range of services.

In London, the company has tried to recruit taxi drivers, but many drivers of London’s iconic black cabs refuse to work with a company they believe is breaking the law. Cabdrivers say the smartphone app that calculates fare based on time and distance is tantamount to a taximeter, which is only allowed to be used by the more expensive black cabs.

Authorities in Berlin and Hamburg banned the service. In response, Uber lowered the fares drastically in an attempt to appease passengers. But the low fares make it unattractive for drivers to offer their services. In recent weeks, Uber cars have been unavailable in the city.

Mr. Kalanick said in a blog post on Thursday that the Asia Pacific region is a priority for the company’s international growth. It recently opened in Vietnam and Singapore, joined with a rental-car firm in Jakarta and plans to add rickshaws in India.

But the company also faces increased scrutiny in Thailand, Vietnam and Singapore, where regulators are examining the service’s legality. On Monday, Thailand’s transport minister, Prajin Juntong, said the government would ask Uber to cease its operations there because it uses private cars that lack fare meters, among other issues.

Uber hopes to recruit prominent investors in India, Latin America and the Middle East as it raises $600 million, with the goal of fostering powerful new allies who could help the company clear obstacles to growth, according to people familiar with its goals.

‘We also need to invest in internal growth and change’

Uber is also seeking to rebuild its public image in the wake of controversial comments made last month by one of its executives, who suggested in a private dinner that the company should do opposition research on journalists critical of its business. The incident sparked concerns about Uber employees’ access to its customers personal data, and Sen. Al Franken (D., Minn.) called on the company to explain what data privacy policies it has in place.

“We also need to invest in internal growth and change,” Mr. Kalanick said in the blog post. “Acknowledging mistakes and learning from them are the first steps.”

Uber’s latest valuation is double the amount set by investors just six months ago and is nearly 12 times last year’s total. The company didn’t disclose which investors participated in the funding.

Write to Douglas MacMillan at douglas.macmillan@wsj.com

They prepare something of value, called transportation. The jobs they create are a balm for our economy, especially in depressed areas like Los Angeles.

AAPL, which produces some of the most sought products in the world -- and which earns enormous amounts of cash every year -- has a valuation just south of $700 Billion ($674.46 Billion as of yesterday's market close).

They produce SOMETHING of VALUE.

Uber -- and so many others -- produce NOTHING of VALUE -- and yet the moneychangers have driven their values through the roof.

What could possibly go wrong?

Better -- what could possibly go right?

Can the WSJ check out the actuals to this funding announcement. Just a couple days ago Kalanick announce Goldman Sachs would be hired to raise money again. Then Poof! The gold train appears with Charles Ponzi at the helm with the fairy Gold Dust to Sprinkle on the original investors. Kalanick has Zero credibility. Who really knows what are the actuals.? What a scam!

This copy is for your personal, non-commercial use only. Distribution and use of this material are governed by our Subscriber Agreement and by copyright law. For non-personal use or to order multiple copies, please contact Dow Jones Reprints at 1-800-843-0008 or visit www.djreprints.com.