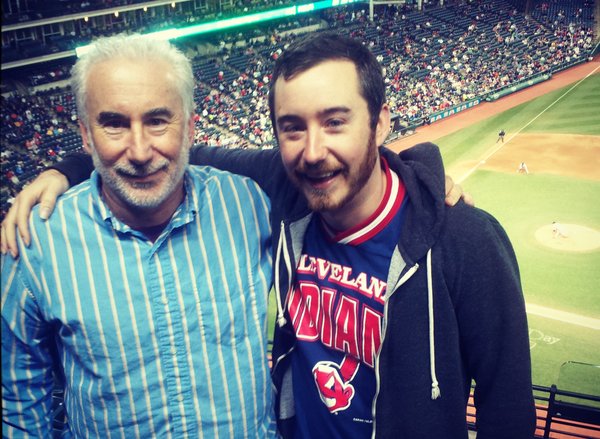 The author, left, writes that his son isn't conventionally successful, and yet, "Max gets up when he likes and does what he loves."

Max, also known as Dolfish, performing at the Vaudeville Mews in Des Moines, Iowa, in November 2012.

They know Max was signed to an indie record label when he was 23. They know he tours a lot and has been reviewed by some important music sites and even by mainstream magazines. They know these things because I send them links with messages like this: “Paste says Max is a ‘remarkably strong songwriter ... worth following his yelp down whatever future path he explores.'” Or this from American Songwriter, describing Max as having “a unique voice and lo-fi mindset” (I assume a lo-fi mindset is a good thing).

What my friends don’t know is how to measure any of this on the only scale most of us have. You know, the one the I.R.S. uses. And to be honest, I’m not sure how to answer the question either. How successful is Max’s music career? What is a tattoo on the forearm of a 20-something in a medium-size Midwestern state worth? The Eskimos have all those words for snow, and it seems the only language we have for expressing success is numeric. It may be a universal language, but it’s an impoverished one. Maybe we need a word for “never having to sit in a meeting where someone reads long power point slides out loud.” Maybe we should have an expression that captures the level of success you’ve achieved when you do exactly what you love every day.

Max gets up when he likes and does what he loves. He avoids most of the things that most of us numerically successful people complain about all the time: racing from one unreasonable deadline to the next, sitting in unproductive meetings and watching simple things made complicated by committees. And he doesn’t want for much, largely because he’s smart enough to know that the only way to be rich is to want little. He takes no money from his parents. If he doesn’t make enough from a particular tour to cover the next few months, he gets jobs substitute teaching.

Somehow he manages to save a little money. So recently, while on vacation, I was sitting on the beach with my friend Dale, a 62-year-old hospital administrator, successful by every measure. He was lamenting that our families’ vacations were about to end and he would have to go back to the daily grind. He described what he was going to do in a few years when he retires. “I’m going to wake up when I want and take a long bike ride,” he said. “Then I’m going to read. I love to read. I’m going to finally learn to play the hammered dulcimer. And if I need a little extra cash, I’ll work a few hours a week as a physical therapist, which was my first career and first love before I got an M.B.A. and ended up herding cats.”

Am I crazy, I thought, or is Dale describing Max’s life? My friend, who has everything, is working his tail off, making maximum contributions to his 401k and buying rental properties, so he can afford to have the life of someone who has none of the trappings of success.

Then I thought about what I want to do when I retire. My plan is pretty much the same as my friend’s. Basically I want to do what I did when I was in my 20s, before I “succeeded.” I want to write novels and teach part-time at a university. And travel, which I don’t have time to do now but managed to do when I was young and poor.

So we live and learn. But in between the learning, I worry about Max. Will he ever be able to get a loan from a bank? Take his family on a vacation? Can he even afford to have a family? And if so, will he have health insurance and all those other things we all acquire in that long middle career before we retire to what we love.

I also worry about whether he will have trouble finding that career if his music fails him. In short, will he become us some day?

But for now, here’s the answer I give when people ask me if Max’s career is a success. I say: “It’s off the charts. He’s living the life of a millionaire retiree.”

Verified Commenters enjoy the privilege of commenting on articles and blog posts without moderation.

Get Free E-mail Alerts on These Topics

Cosmic Census Finds Billions of Planets That Could Be Like Earth

Log in to discover more articles
based on what you‘ve read.

Go to Your Recommendations »
What’s This? | Don’t Show