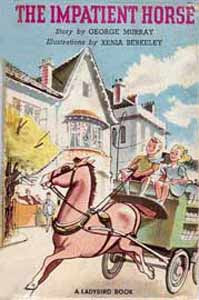 Last week the BBC forwarded on to me a letter from the son of George Murray, author of probably the rarest Ladybird Book for collectors: The Impatient Horse. It was a lovely letter and in it he mentioned the origins of the story:

"In those days United Dairies, who had a depot at Esher, delivered milk in horse-drawn vans. Our milkman was called Old Harry and my mother, who had a kind heart, used to offer him a cup of tea which he would drink in the kitchen of our suburban house. The horse would, of course, have to wait for him and after a few minutes he would get fed up and would try to come into the gate, pulling his cart right across the pavement"

Apparently Murray wrote another book for Ladybird in the same style: "The Fairy Fair". But for some reason the IH did not sell well, the series was discontinued and The Fairy Fair, presumably, was lost to the world.

But at least The Impatient Horse's short life-span has ensured that today it is loved and prized by Ladybods.
Posted by Helen at 06:19

My embryonic 'Learn a Language for Free' website: language.webnode.com